For many, getting pregnant after sex can be instant and they don’t seem to bother about any sexual position or try too hard, for some other people, it involves a lot of planning and work.

To maximize the chance of pregnancy, giving some thought to your positions during sex is necessary because it is believed that deeper penetration increases the chances.

Here are some of the best sex positions to try out;

This is the done with the woman down on their hands and knees in a dog position and the man penetrates the woman from behind.

Doggy style is one of the most effective sexual positions to get pregnant because it involves deep penetration.

In Doggy style, the deeper penetration opens up the cervix and enables sperm to be deposited, meaning the sperm don’t have to swim as far, you can achieve this effectively  It can be more comfortable for the receiver to kneel in front of a large pile of cushions, and rest their body on top of them.

This is the most common, popular and comfortable position to have a baby,

With the Man on top and the Woman  lying on her back, the sperms get the best possible path to the cervix and help you conceive,  also supporting himself on all fours, allowing the receiver to lift her hips towards the Man’s penis, this allows easier penetration.

This is a very relaxing position and doesn’t require so much penetration.

The man will have to curl behind the woman giving the image of a spoon and allowing easy penetration from behind.

You need to be really flexible for this, in this method, the woman raises her legs up while the man kneels and penetrates into her, and the woman resting her legs on his shoulder makes her more comfortable for deep penetration.

This method is done by keeping a pillow under the hips, tilting the pelvis high enough for the man to penetrate while he is on top, this way the sperm gets to the cervix easily, many women finds this position the best for getting pregnant.

This position is done by the man laying down while the woman stays on top facing his feet, this method is known to be very effective because the angle of entry is different and it allows easy movement of the sperm to the cervix.

The wraparound sex position involves the man sitting upright while the woman climbs on top facing him as she wraps her leg around his waist and enabling him bend his knees and lift his hips up. In this position the woman takes control and it enables deeper penetration. 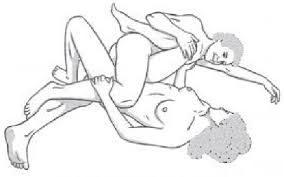 The name alone describes the position, the couple lay on their sides facing each other with the woman’s top leg placed over his hips and her bottom leg in between his like a scissors, this is romantic and satisfying because it gives friction in all the right spots, it is a wonderful sex position because it brings pleasure effortlessly.

Sammy Forson opens up on depression, overweight and more

Follow @eventlabgh < Recently, Bloomberg  revealed how founder of Daniel Wellington, Filip Tysander was causing a stir in the world of...

Follow @eventlabgh < Makeup artists in Ghana have over the years been sidelined in their works but there is a...

10 Things To Avoid When Seeing Your Period

Follow @eventlabgh < Period comes with its difficulties, and as much as some of us get a mini heart attack...